After the victory at the „Spitzenleichtathletik“ in Lucerne (Switzerland) on 09.07.2019, my journey continued to Monaco (Monte Carlo) for the Diamond League Meeting.

After arriving at the Fairmont Hotel (Monte Carlo), there was a good lunch with some French specialties. With beautiful Mediterranean weather over 28 ° C and a high humidity, a relaxing city trip was inevitable. As always, the port of Monte Carlo was full of expensive yachts, sailing ships and speedboats. Unfortunately, there is a lot of redevelopment and rebuilding, so the city is even closer and louder. The coastal idyll suffers from the construction of expensive projects.

On the day of the race it was over 28 ° C again and it felt like you were just melting away in the stadium. On that day everybody thought it should run perfectly with the timing: 19:30 – first event on that day and no long runs starting shortly after we started. With over 83m I started in the competition, then wait for more than 10min, we could not continue because of the TV program began the 2nd and 3rd attempt.

86,04m were now in my account. Unfortunately, the competition was interrupted again and again, not because of some 3000mH runs or 400m sprints, but because of athletes who talked in front of our runway with their coaches, the judges messed up in the throwing order of the athletes or because firstly an aquarium trailer video had to be shown on screen. The course of the race was unsatisfactory for some athletes in technical disciplines, especially the javelin throw.

After a less well-organized competition for us athletes, but still commendable athletics spectacle, it went back the following day in the home to Jena. The next few weeks will include intensive training days until Sunday, 04.08.2019, when the German Championships will take place in Berlin! 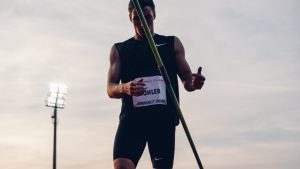 Victory at the top athletics in Lucerne